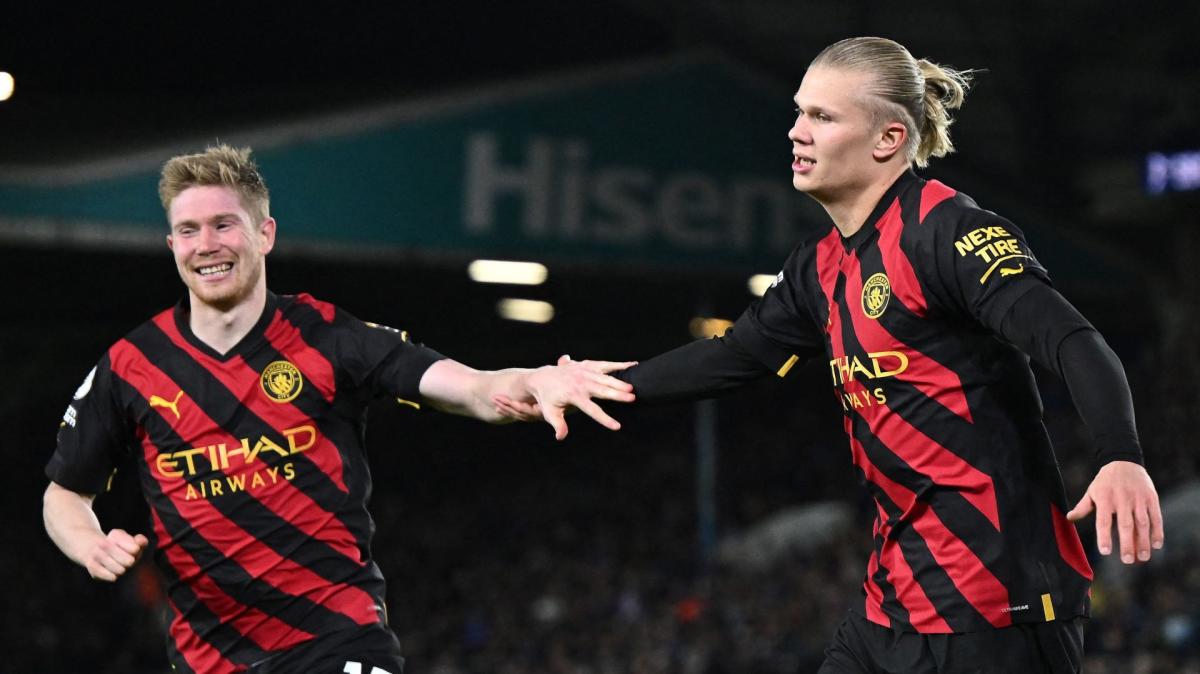 Erling Haaland bagged a brace to give him 20 goals in his first 14 Premier League matches as Manchester City issued a stiff reminder to the field: The reigning champions’ hunt for a third-straight Premier League Trophy remains very much on.

City pulled back into second place in the PL with a 3-0 defeat of Leeds United at Elland Road on Wednesday, five points behind Arsenal and still almost two months away from their first league meeting of the season.

Haaland’s 20 goals in 14 games makes him the fastest player to the 20-goal mark in a single season, besting Sunderland’s Kevin Phillips by seven games.

Rodri also scored for Man City and Jack Grealish set up both of Haaland’s markers in a bright showing on the wing. Pascal Struijk scored Leeds’ goal off a 73rd-minute corner kick.

Fifteenth-place Leeds is two points clear of the Premier League’s bottom three and has played one fewer game than the five teams below it.

[ MORE: How to watch Premier League in USA ]

How would Pep Guardiola and perhaps more critically Erling Haaland react to six weeks without a meaningful match, more than a month sitting on a surprise loss to Brentford before the World Cup break?

Well, it certainly wasn’t a reaction of rust in attack (although cracks again showed at the back).

Haaland nearly scored in the first minute and scored his 19th and 20th goals of the Premier League season before nearly collecting a hat trick in an easy-enough win for the two-time defending Premier League champions.

Leeds pressed and buzzed as usual but City was no worse for the wear as Kevin De Bruyne showed particular class and cheek on the day and Haaland continued his incredible start to life in England’s top flight.

Perhaps the most brilliant development, however, was Jack Grealish. The ex-Aston Villa man was fouled consistently by Leeds but never stopped buzzing. Nor was Grealish deterred by a couple of missed first-half chances.

Grealish instead raced to steal a sleepy Liam Cooper pass before laying off to Haaland for a goal, celebrating passionately afterwards before a teammate got to the assist man.

He’d add a second assist on a drive around the left to feed Haaland, and would exit the game as perhaps it’s most crucial player (Rodri and De Bruyne would like a word as would the brace-bagging Norwegian).

Either way, City would like the Premier League to remember who finished on top the last two seasons. As if it’s forgotten.

Stars of the Show

Man City hosts Everton at 10am ET on New Year’s Eve while Leeds hosts Newcastle at the same time Saturday.

On his family being in his birth city watching him play for one of his dad’s former clubs against another: “Not even in my craziest fantasy would I think I would play for Manchester City against Leeds at Elland Road. It’s a really proud day for me and my family on the tribune ride over here,” Haaland told

“It’s been fantastic first half-year to work with Pep and such amazing players, not only the coaching staff and players but also the medical staff to fix my body with some small problems. It’s getting much better and it’s been a pleasure to work with these guys to improve my game because I’m still young. Of course everyone has opinions on how you can fit in, but what else can do but do my thing?”

On how he reacts to missed chances: “To be honest, I get really pissed off. When I miss I want to score much more. When I score one, it’s such a good feeling I want to score another. [Turning to Leeds boss Jesse Marsch on set] Jesse, you remember in Salzburg it was hard for me when I missed chances. I’m getting older, more mature, and a bit better at handling those situations. But then you have to think in a way about the next chance.”

To Erling Haaland, he Leeds defending Erling Haaland:“Erling, I think we did a decent job on you for the most part but your ability to sniff out plays, [is just so good]. I felt like we were hard to break down.”

On the end of the game as Leeds fought to comeback: “The thing we know about our team is that we never quit. The timing of the goals was painful. If we can get into half [0-0] maybe we could make a few adjustments. In many moments, it’s Man City — the best team in the world with maybe the best coach in the world — what can you do? … I take this away as a positive. We limited a really good team and just weren’t able to be good enough, and made a few too many mistakes.”

How to watch Leeds vs Manchester City live, stream link and start time

How will City look after a lot of time away? Probably not too far from its usual self, especially since Erling Haaland is well-rested, Kevin De Bruyne is more rested than expected, and the Blues will have spent six weeks looking at a table that says they are five points behind Arsenal. Still getting used to that whole sentence structure.

Jesse Marsch’s Leeds beat Liverpool and Bournemouth before the thrilling but unsuccessful loss to Tottenham. USMNT midfielder Tyler Adams has yet to return to Leeds’ lineup, but Brenden Aaronson came back in a 2-1 win over Real Sociedad and impressed. He will join Rodrigo, Marc Roca, and Jack Harrison as a key component the rest of the way.